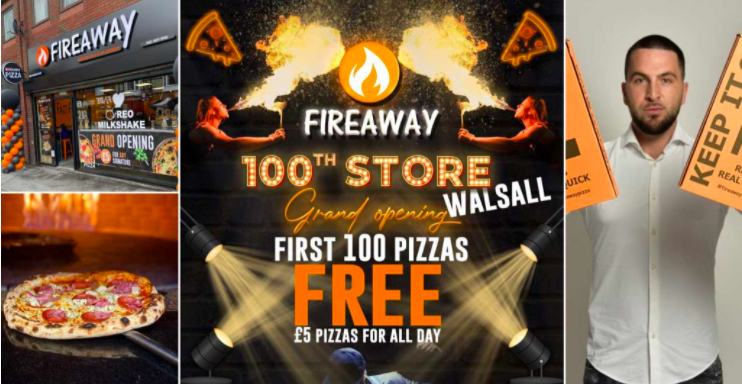 It is not a joke when people refer to Fireaway Pizza as the fastest-growing pizza chain around. A project that originally began in South London has now successfully extended its reach all over the UK and beyond. As a visionary, Founder Mario Aleppo’s drive is to dominate the pizza arena for a very long time. So, it is not surprising that Fireaway Pizza has now attained a new milestone – an impressive record of its 100th store!

How Far Has Fireaway Pizza Come Among Other UK Pizza Stores?

You may be aware that there are over 2,000 Pizza stores across many popular franchises like Pizza Hut, Bella Italia, Zizzi, Papa John’s, and Domino’s Pizza in London alone. However, none can deny the uniqueness of Fireaway Pizza. Fireaway Pizza started back in 2016 and it has this far been recognized as a top Pizza franchise in the UK. Mario Aleppo started the chain with a bank loan, a store and an employee.

Even though it began with one store, it has become the famous award-winning chain of stores. The Mitcham-born founder had the vision of a Subway-style pizzeria. He believed in delivering fresh, homemade, and infinitely customizable pizza. His vision is similar to how some sandwich outlets allow customers to choose different bases, cheese, meats, and toppings. And despite the various combinations, the prize remains the same. That is why you will find the tag “Designer Pizza in 180 seconds!” in front of their stores. So, it doesn’t matter the kind of pizza you want. Fireaway is committed to satisfying your cravings in a few minutes. The work rate is just exceptional!

Perhaps, when Mario Aleppo was drawing the vision, he did not expect to have up to a hundred stores. And if he thought about it then, he is now living his dream. Because Fireaway Pizza now has opened its 100th store! The new store’s location is at Lower Hall Lane in Walsall, West Midlands region of England. The grand opening came with its first 100 Pizzas giveaway for free. At the same time, the remaining sales for the day cost only £5.

How Did Fireaway Pizza Become Prominent?

Indeed, Fireaway Pizza has enjoyed a fair share of arithmetic growth. Exactly a year ago, the Pizza chain had only 50 stores. But in less than a year, it has doubled its number. And at the latter half of 2021, the Pizza chain set out to open 25 new stores in 25 weeks. You would probably be astonished to know that part of this expansion happened in the middle of the COVID-19 pandemic. The fact that this company witnessed tremendous growth at a time other companies were shutting down undoubtedly shows how much customers greatly appreciate Fireaway’s value. Mario also went back to his Italian roots to source fresh ingredients to achieve this feat.

The whole process began by opening new stores every six months. It improved to every three months. Then it bettered its productivity by starting a new store every month. Now, it is opening a new store every week. With Mario recognizing the global potential of Fireaway Pizza’s scalability, he has brought his brothers Luca and Fabio on board. Luca and Fabio will now spearhead Fireaway Pizza’s operations in Germany and the Netherlands. Indeed, Fireaway is stopping at nothing to give the world a taste of nutritious and customizable pizza.

What is Fireaway Pizza Doing to Satisfy Customers?

Fireaway Pizza is a credible franchise among customers because of its inclusivity. The service offered has a full range of gluten-free and vegan options. Hence, the focus is not only to give you a tasty meal but also help you have a healthy life. Furthermore, all Fireaway Pizza stores open for customers by mid-day and do not close till 11 pm. It will not come as a surprise that regular customers have requested to be a franchise of Fireaway Pizza after being satisfied with the service. After all, who wouldn’t want to be part of such greatness?

So far, you can be sure these stores have been winning awards. In 2019, Fireaway Pizza was recognized with the Best Small Pizza Chain Award at PAPA Awards. The following year, it was recognized again as the Rising Star Pizza Chain of the year.

Apart from the UK, countries like Germany, Netherland, Bangladesh, Pakistan, India, Canada, etc., can expect Fireaway Pizza in their neighborhood.

You can reach Fireaway Pizza from Home

Clearly, there are tons of reasons Fireaway continues to be a top choice for many pizza lovers. Talk about flexible services, which implies that eeveryone can get a bite of their favourite pizza irrespective of their location. Fireaway Pizza offers affordable and fresh pizza delivered to the comfort of your home. You can make an order using Deliveroo, UberEat, or JustEats. And for sure, you will get your delivery in record time.

Oh! Not to forget. Fireaway is also willing to help with a mind-blowing event if you are having a party. You can request as many pizzas as you may need.

Fireaway is ready to take you on a food fantasy journey. And your journey to having a Fireaway franchise store might also start today!